Leading with Heart: Tyler Power Wins 2019 Arcanite of the Year 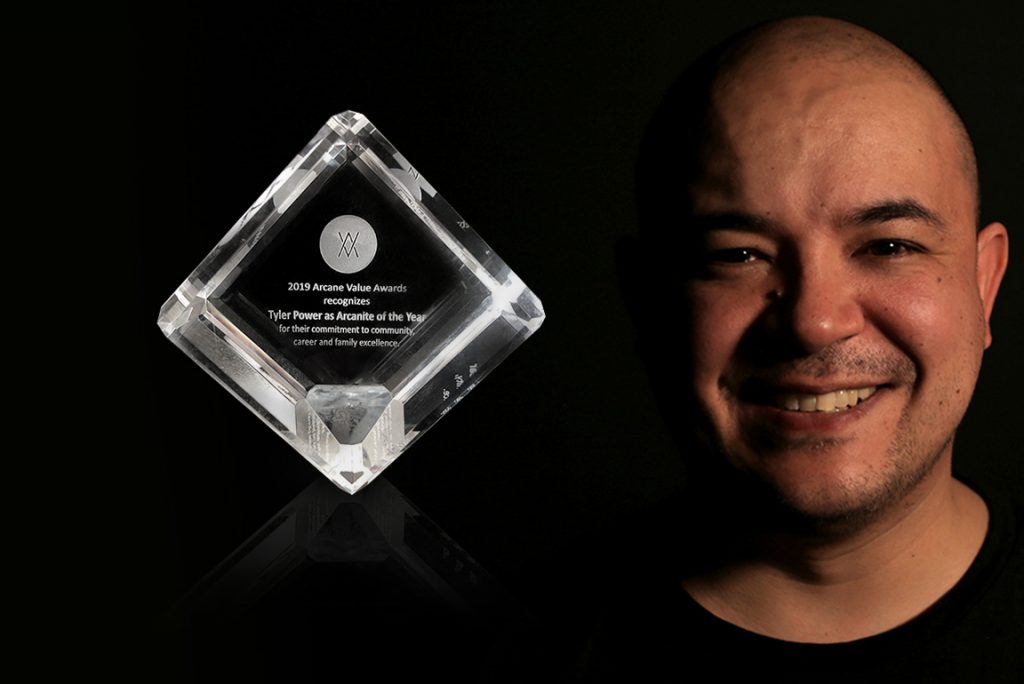 Leading with Heart: Tyler Power Wins 2019 Arcanite of the Year

Every March, Arcanites from across the country gather under one roof to celebrate the past year. With catered food, an open bar, and some (not so) killer dance moves, our Annual General Meeting ain’t your average business update. But the highlight of the night is always the Arcanite of the Year award.

Created in honour of Tony Crncich Sr., father of Arcane partner and co-founder, this award is presented to someone who embodies what it means to be an Arcanite. This year, that was Tyler Power, Creative Director and General Manager of Arcane’s Calgary base.

For Tyler, winning this award was about more than just individual recognition. It was about celebrating the hard work of his entire Arcane team: “I used to play a lot of sports back in the day and an old coach told me: ‘You go to the wall for a teammate, but you go through that wall for a friend.’ And I think we’re pretty fortunate at Arcane that we get to go to work every day with our friends. I’ll do pretty much anything for them.”

How Did You Get Here?

I got a job straight out of school doing educational animations for big pharmaceutical and cellular companies, but I felt like it was lacking something. I thought about going back to school but I wasn’t dead-set on it yet, so while I was putting in my applications I decided to go travelling in Europe with my girlfriend at the time. We came across an Andy Warhol exhibit in Monaco, France and I was drawn to one of his lesser-known pieces entitled Diamond Dust Shoes and, I know it’s cliche, but I just thought: “Man, I love this. I really want to do this. I’m gonna go home, I’m gonna go back to school, and I’m gonna get my degree in design”.

So, home I went where I did my schooling and got recruited straight out of ACAD to a big digital agency. From then on, I moved back and forth between small- and medium-sized shops. I was sort of on this mission to bring good design to everybody: big brands, small brands, and everything in between. I just felt that everybody deserved it regardless of budget. With that in mind, I eventually found my place in those medium-sized agencies where I could deliver on that belief.

What Does It Mean to Be an Arcanite?

I treat everybody on my team like family and I’m very connected to that. I think that’s what’s kept me here for so long. There’s a lot of turnover within the marketing industry, but there’s always been something special about Arcane. Even when I was first starting out here, I thought: “There’s something here. I can make something of myself and contribute to making this place better”. So, I take that mentality with me every day and with everyone I meet. It’s about bettering myself to better the people around me. I’m a heart on my sleeve kind of guy, and I’m very proud of what we’ve built here. It’s also something I’m very protective of. The people I work with and the culture mean the world to me.

What Does Winning This Award Mean to You?

I was fairly choked up. They showed a video of my wife and kids — there wasn’t a dry eye in the room. It was very unexpected and a huge honour. In Calgary, we work very hard to be a contributing party to the Arcane machine. But, to me, Arcanite of the Year isn’t really an individual award. I appreciate that people submitted their votes for me, but I can’t really do my job without them and the whole idea of making them better has made me better. I learn so much every day from other people — about them but also about myself. They fuel my energy to keep going and to keep plugging along and I’m super fortunate to be surrounded by an amazing team of people.

How Have You Helped Arcane Innovate?

I co-lead the Creative function with Matt Robb, 2017 Arcanite of the Year, and I wouldn’t be here without him. We have a very good working relationship, and together we worked really hard to extract the idea of Performance Creative. We were tasked with the repositioning of Arcane a couple of years ago and the original brief went like this: tell us what the future of Digital Marketing and the internet is. Matt and I looked at each other like: “oh, I don’t know”.

Arcane has always been a leader in ROI-based marketing — we’ve done it better than almost anyone else. I think we can truly say that. But five years flew by and now every agency presents ROI as their secret sauce. The reality is that it’s not a secret, it’s table stakes now. So, we really needed to contextualize and make something tangible around what we were doing. That allowed us to lift the veil on our process and revisit it. We looked at what we had and what made us different and, really, that was the ability and opportunity to iterate and test things outside of what the algorithms do.

I think the mix of the technology, data, and the numbers, which we’ve really hung our hat on for a long time, forced us to look at the complementary side of that, which was the human element, the creative and the emotive side. That kind of conceptual thinking evolved into what is now our vision and model. Performance Creative brings all disciplines together to deliver a product that is focused on performance, results, and quality design.